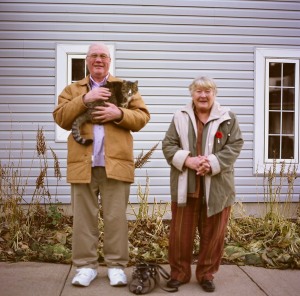 ON A SUNNY SATURDAY morning laced with frost Ashleigh woke me up to get ready to drive to Fredericton, New Brunswick; the birthplace of my Grandfather. My sister and I had received one birthday card, a doll and a phone call from him through out our life so far. This visit marked the first meeting of Grandpa MacLean. I had phoned him on Friday and we arranged to meet at his apartment complex on George Street in the late afternoon.

Ashleigh and I set out for the five and a half hour drive to the sleepy little town. I had excitement running through my veins while driving through the Quebec countryside. During our drive my sister pointed out strange lump formations (made of soil, grass and rock) that randomly dotted the landscape. She described how the ice age had created such mounds on the land which disrupted the routine strips of farmland and small houses. On we drove.

We arrived in Fredericton in the late afternoon around three thirty (with the time change). When we drove down George Street I got a sense that the way of life there was very simple. I took in the double story wooden houses, briefly found a cemetery on the map and saw the glimmer of the river that runs beside the town.

Grandpa was standing outside his apartment when we drove into the driveway of the apartment complex. It seems a usual habit of his to wait outside. He was wearing a caramel coloured coat and had a tabby cat at his feet. “Andrea” the cat, I learned was named after an American model. She was brown with orange flecks and could jump the six feet to reach Grandpa MacLean’s right shoulder. He walked over to us with a little bit of caution. One could see the excitement in his hands down by his side as he walked to the car door that Ashleigh was opening. She gave him a great big hug and his eyes smiled at the edges. I got out of the car, walked over and did the same. That is what a granddaughter should do, is it not? His “my god’s” were warm and heart felt as he felt in his pocket for the keys to open the door to the building where he had lived for the past twenty years.

Inside on the communal dining room table was roasted chicken and fries bought from the local store. His sister, our Great Aunt Miriam, sat in the burgundy and cream living room. She greeted us with “Oh! My Dears ” and we each hugged her and then gathered ‘round the table. We learned that my Grandfather is seventy-four and she is eighty years old. Both had hard lives they told us; his story speaking of military service and undergoing heart surgery, and her having two husbands who either died or left her with three children to raise.

As Grandpa talked about his service in the Canadian Legion, Auntie Miriam sensed the discomfort shared by us all and tried to change the subject with “Would anyone like more chicken?” or, “how about some cookies Ed?” So Grandpa got up to get some dessert.

Edward George MacLean as I learned takes life day to day and rides his orange bike for exercise and excitement around town. Auntie Miriam is loosing her memory but is very sweet when she offers her home to us anytime we come back, for the fourth time. We leave around six thirty or seven in the evening after being shown his apartment (a military bachelor pad with photographs of him as a soldier and us, his granddaughters). We say our goodbyes but not before taking group photographs, and myself taking a single portrait of the grandfather I never knew except from a single black and white portrait taken when he was in “the service” some forty years ago.

He stands outside his apartment once again with Andrea in his arms and looks our way while we get organized to drive out of the parking lot. He says over and over “I’m just tickled pink that you girls came to visit”. After hugging goodbye the six foot, buzz-cut hair gentleman who is my grandpa, I noticed that his cheeks were rosy. My sister and I waved a last goodbye and he returned it with a single wave motion of his arm and walked back to his gray paneled apartment building.

I feel disturbed about the things he spoke of when he was in “the service” and how they have emotionally affected him in his present day. My mom told me that it was not that long ago when he was very proud of his history with the Canadian military. It is interesting how much time it takes to identify memories and inturn how it affects the body and mind , for him to such a point of anger. As we drove back to Quebec City, I searched the darkening skies for clear thoughts and understanding about our first meeting, but a muddy feeling prevailed. I found satisfaction a few days later after a brief conversation with my sister about our visit. I am happy to have finally met Edward George MacLean and learn that it made his year to have met us. I have filled a few gaps in my knowledge about the Scottish side of my family. One truth that I have realized is that meeting him once does not reconcile a lifetime without having a Grandfather around. It was a memorable meeting and it was our last. My Grandfather and Grandmother leave behind a number of questions about mental health issues and their generation’s lack of accepting or understanding (or maybe their own). I am left with the task of addressing mental health issues in my family and not leaving. I will be a Grandmother one day and I will not leave my family.